What might at first sound like a contradiction was in fact implemented in an exemplary manner in the greater Frankfurt area by Konrad Knoblauch GmbH. During the conversion of an early 1960s apartment, the company from Markdorf on Lake Constance used several additional rectangular units made of wood to precisely tailor the home to the needs of the residents. On 350 square meters on the roof of a commercial building in the pedestrian area of a town of almost 20,000 inhabitants overlooking the roofs of the town. The location of the new penthouse with its stunning 360° panorama combines the advantages of an urban lifestyle with great views of the countryside.

The possibilities offered by the existing structure including lift shaft, already one floor higher than the commercial building itself, were carefully considered and used as a basis. It soon became clear that the overall height of the lift shaft was to serve as a guide. The planners opted for an extension of the living space by stacking rectangular units of various sizes and orientations. This resulted in three fully usable levels, connected with each other by stairs and air spaces. Each unit was assigned a separate use.

The first existing unit on the first level covers around 120 square metres and accommodates the area for children and guests.

The second level consists of two units of over 140 square metres. An existing unit, where the dining area is located, was extended to make room for the kitchen and an adjoining pergola. The other unit holds the living room with a 360° rotating fireplace, which was converted to use ethanol, since using wood as fire material was not permitted because of the building’s town centre location. Air space was added to the living room unit, which opens the room up into the third level. The second level also accommodates the 150-square metre roof garden, which is a true highlight with its outdoor pool and the pergola-covered outdoor kitchen with integrated barbecue. The apartment thus exhibits all the advantages of a classic detached house with garden.

The 90° rotated unit on the third level is built around the existing lift shaft. Here, the master bedroom with dressing room and spacious bathroom was created. The unit protrudes above the level below so that the bedroom hovers above the roof garden.

The transitions between the rooms are flowing, which has a unifying effect on the penthouse despite the clearly defined areas. The individual units are well distinguished with different floor coverings and wall colours and largely render constricting partitioning walls unnecessary. The generous space is further underlined with folding glass elements, which open the kitchen to the roof garden and also join together the indoor and outdoor space of the living room and bedroom.

The central staircases lend particular emphasis to the height of the three-storey apartment. In the stairwell hole, a perforated plate with a changing hole pattern that increases in opacity the further up you go provides the necessary privacy. There are gently tinted glass panes that serve as railings between the staircase and the adjacent rooms and corridors, which underline the lightness of the penthouse.

The stairs between the first and second levels run in opposite directions in order to create a vertical connection with the resulting air space. The living room, which is open towards the top, also creates a visual link to the spa area on the level above. There is also a connection and visual link between the living floor and the parents’ area: A footbridge above the air space of the staircase leads to the bathroom. And here you find another highlight: the large skylight – without being seen you can have a shower or bath while looking at the blue sky or the stars.

The location of the penthouse above the roofs of the town and the beam-style architecture means that each area is deliberately created to afford the most beautiful views. Level one is east/west facing, which means the children’s bedrooms benefit from midday and evening sun. The second level with its living, cooking and dining area and the roof garden offers panoramic views and is light and sunny all day long. The graphic roof structure of the pergola picks up on this, creating stunning ever-changing shadow patterns. The occupants also have an unobstructed view of the old town and the pedestrian area from the living and dining room. The south-east orientation of the third level brings glare-free light from the north to the spa area and morning sun to the parents’ bedroom. From here you can see the nearby castle, from the other side you can enjoy the stunning view over the old town; and thanks to the structural recess you are protected from view.

The harmony of the penthouse is also due to the fact that architects and interior designers have worked together from the outset, allowing the design concept to evolve from the outside in. This creates a separability that makes the overall design look like a unified whole. The beam architecture of the building as a whole is reflected in the interior as a straightforward, modern and timeless design. The furnishings are designed to accompany the family of four through all phases of life. The bunk beds in the children’s bedrooms, for example, were designed to suit children of all ages –  the retracted second level serves as a kind of tree house to play in for a small child and as a private retreat for a young person. The bathroom for the two children is a long and very narrow room. It was divided into different zones to make it look shorter using the bathroom elements themselves and the coloured contrasts on either side of the room, with bathtub on one side and shower and toilet on the other. The comic-themed tiles on the walls give the bathroom a youthful appeal without being brash.

The parents’ bathroom is awash in bright tones. Only eight tiles were laid in the room, six on the wall and two on the floor. The subtle marble white harmonises with the white oiled Douglas fir which the rest of the floor is covered with. This special atmosphere continues into the spa area. Muted, warm colours give way to delicate white. The dark blue of the sauna cubicle’s bench recess has a calming depth effect and tolerates the changing pattern of the tiles on the round floor surface.

The kitchen as the centre of family life deserves a special mention. The kitchen unit in the centre serves as a kitchen table with simple stools, while the integrated metal frame with drawers is somewhat  reminiscent of an old wooden stove. The wall cupboards are covered with high-quality slats inspired by the good old kitchen sideboard. Despite the large and eye-catching individual elements, the kitchen nonetheless looks very light thanks to the friendly colour scheme. The oiled walnut of the cooking island can also be found in the adjacent dining area. 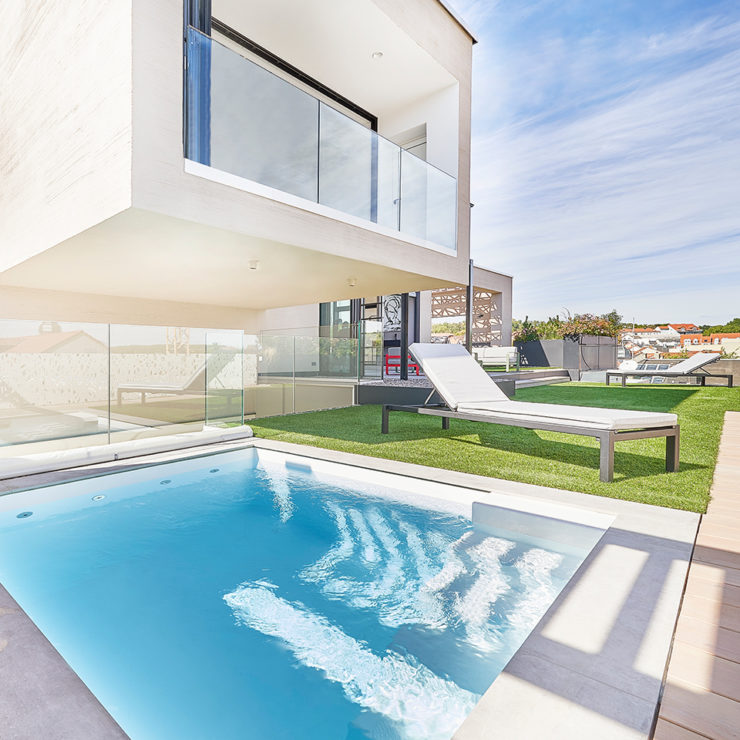 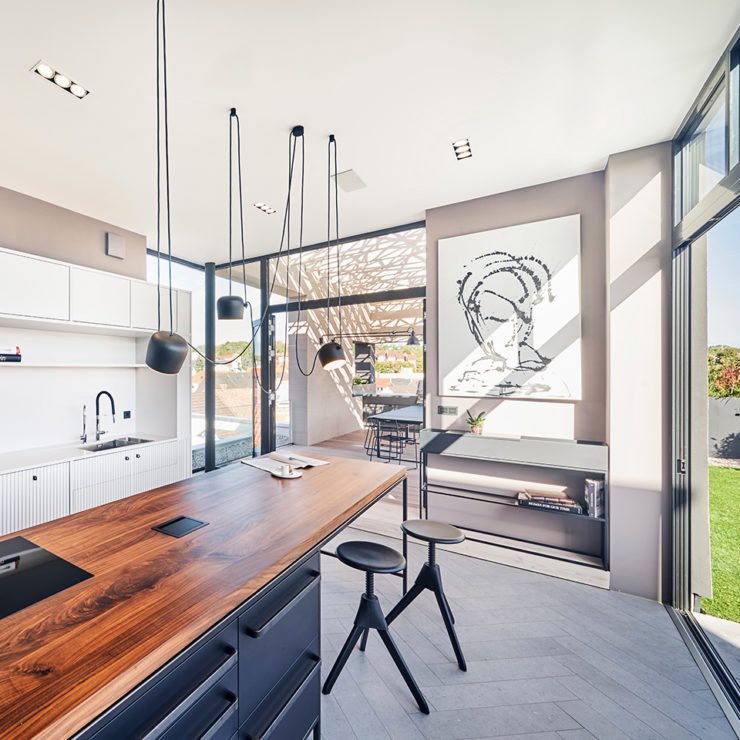 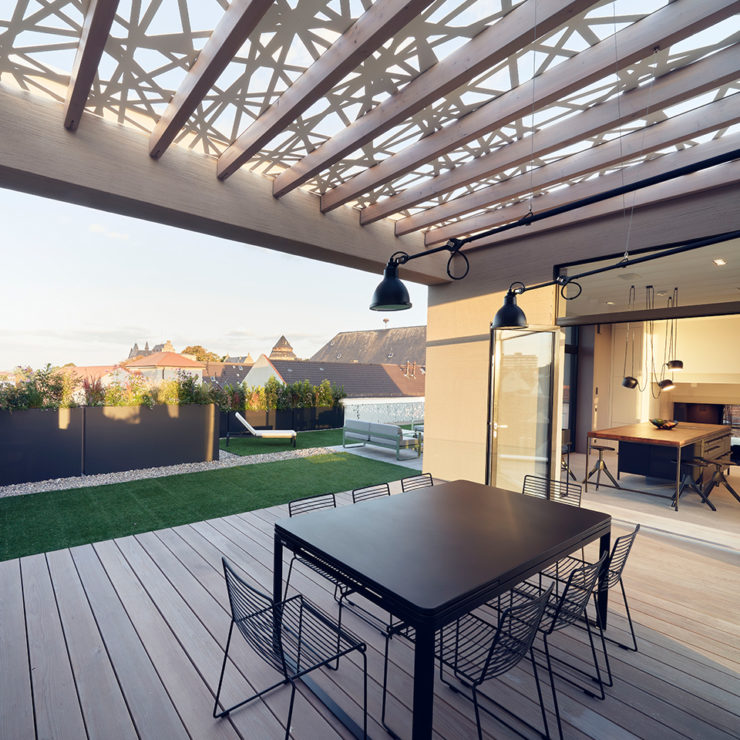 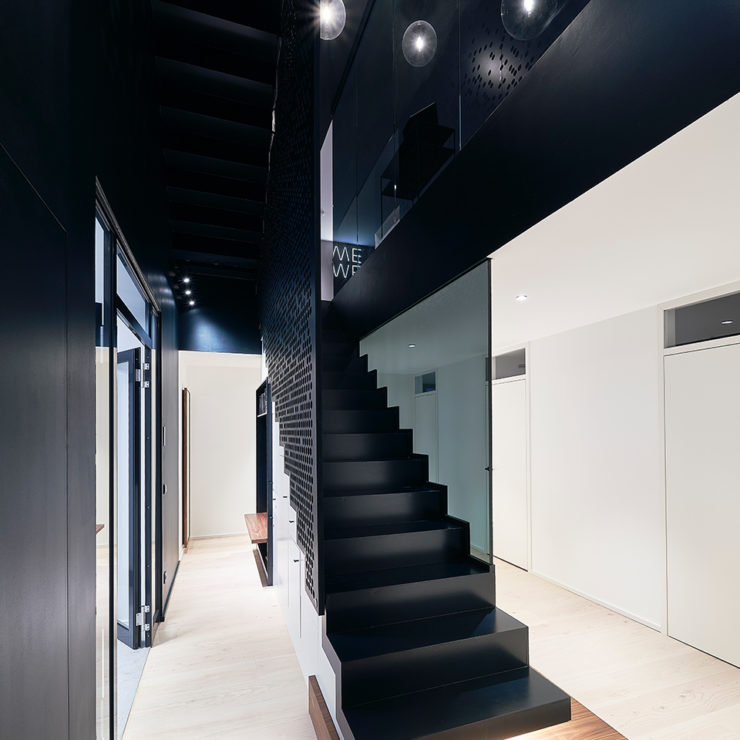 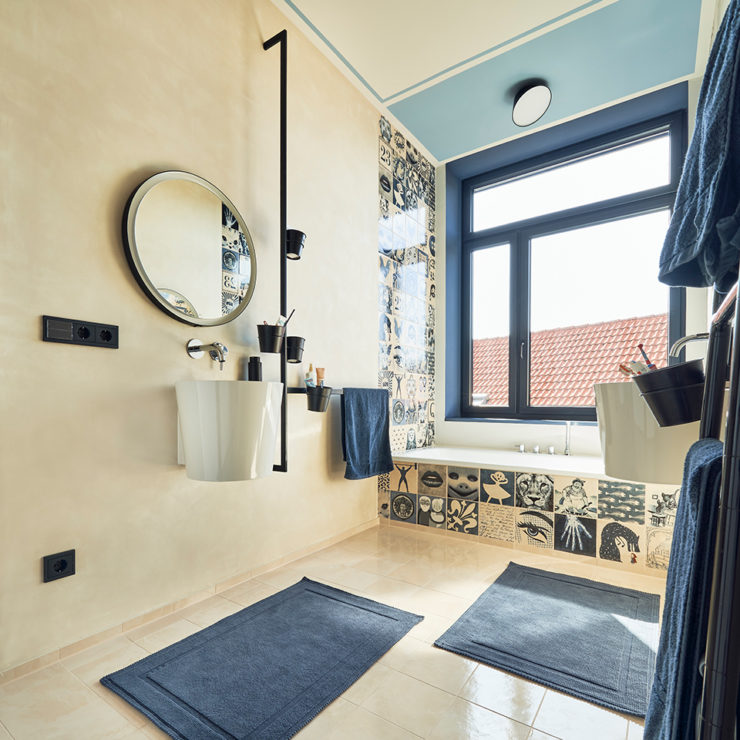 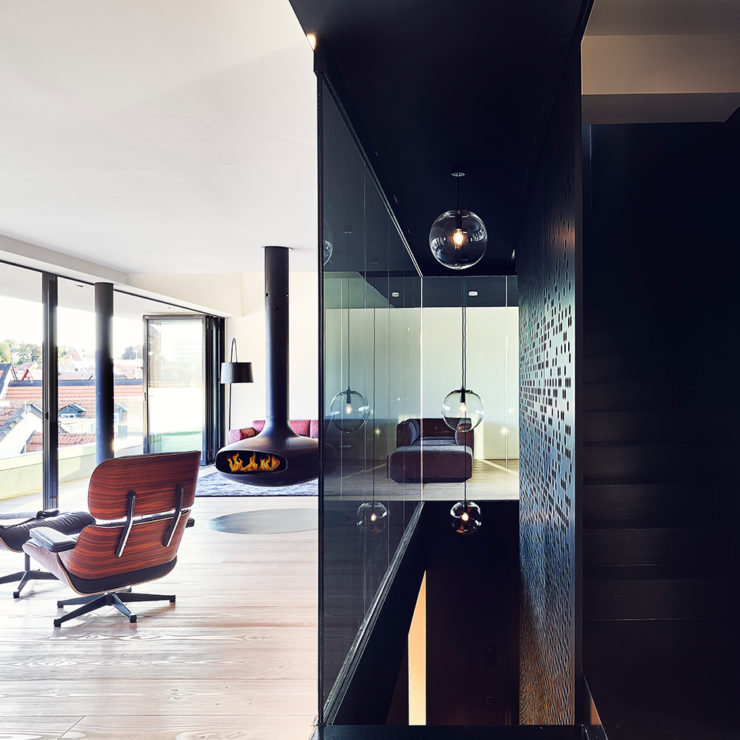