THE SPLIT BETWEEN PALAIS ROSE AND UNDERGROUND.

Over the last six months, we have renovated and redesigned four retail areas at fashion house Lott in Lippstadt. In autumn 2017, the Palais Rose women’s department and Underground young fashion area were renovated. This was followed in spring 2018 by the kids’ area and accessories island. Lott has therefore redesigned some 1,000 m2 of space in total.

Underground is the largest of these areas, totalling over 500 m2. Situated in the basement, the design is based on that of an underground station.

Dark blue Metro tiles along the staircase leading down highlight this association. The brands on sale are then displayed on neon signs, like on a timetable. An oversized yellow arrow indicates the way to the ‘shaft’. One striking design element is a yellow painted scaffolding system which, with its specially attached leather loops, resembles a row of hand grips running along the black ceiling while also serving as a product holder when arranged vertically. The underground idea has been incorporated into the design with lots of details. A column has been clad with metal and trowel and fitted with large rivets which are reminiscent of the slightly rough and ready charm of an underground station. The floors of the changing room cubicles feature a tongue-in-cheek reference to the British classic ‘mind the gap’ announcement. A specially designed wallpaper with a train design stretches along over 10 metres of the wall. And on the opposite side, a local graffiti artist has sprayed a colourful piece of artwork onto the wall. The back-lit window frames feature graphic art which resembles a billboard, creating a big city feel.

The Palais Rose was completed last autumn. The name of this listed building says it all: a wide, palatial staircase leads from the ground floor to the 180 m² mezzanine; the colour pink is featured in the carpet and on the walls. Floral graphics and real plants imitate the feel of a palace garden. The white painted stucco ceilings are like something you might find in a royal household and the old wooden beams add a down-to-earth contrast. The check-out counters in a lush green and carpets and wallpaper of the changing room cubicles break up the otherwise pastel colour scheme. The materials used are simple: maritime pine and light painted metal with an ash wood wall panel where complete outfits are presented. Subtle illuminated logos of the various brands make navigation easier. And like in the young fashion area, the women’s department also includes some existing furniture and fittings which have been put to new use as well as new wall systems and enclosures in the centre of the room.

The Palais Rose has a separate access from the street which was barely noticeable before the renovation. Now it has been jazzed up with an illuminated graphical work on the wall and ceiling. A large coconut mat bearing the inviting words ‘Aber hallo’ makes it clear: this is the way in!

The new kids’ department opened in March is brand new. The area for teenagers is the most striking on the first floor as they explore the town for themselves. Meeting friends, having a drink and going shopping. The walls are decorated with a graphics-based wallpaper featuring motifs of big city life. Rack frames in simple black and youthful yellow display the clothing.  The lively colour can also be found in the changing room cubicles where an existing brick wall has incorporated into the design and painted yellow. A cool banana wallpaper also adds a bright yellow accent. The whitewashed pinewood furniture acts as a stable and calming force.

The accessories area on the ground floor was completed at the same time as the kids’ department. This 90 m2 island is situated beneath a large back-lit ceiling sail and has been retained following the new design. Presentation systems in muted tones create a calm platform for these small yet colourful items. The metal frames are painted white, the shelf containers are in light ash and the insides are stained dark. The systems have partly been taken from existing stock with the addition of new elements. The calming longitudinal alignment along the central axis of the ceiling oval integrates existing columns in the arrangement of the product displays, complete with mounts. 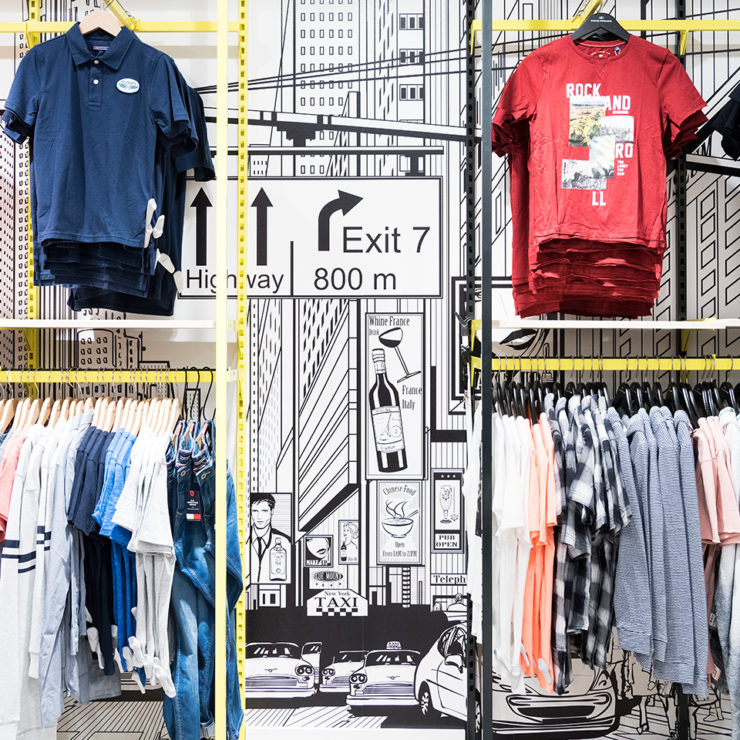 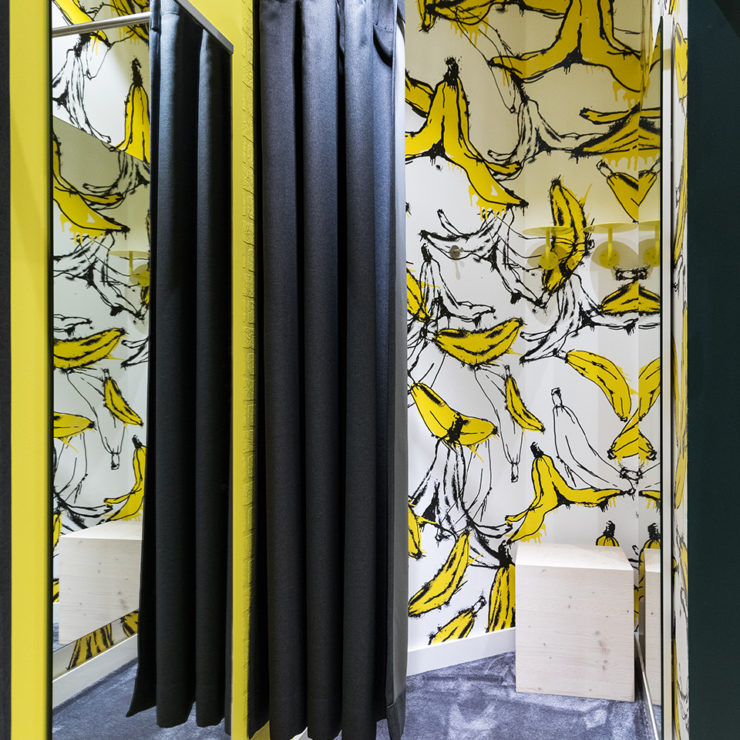 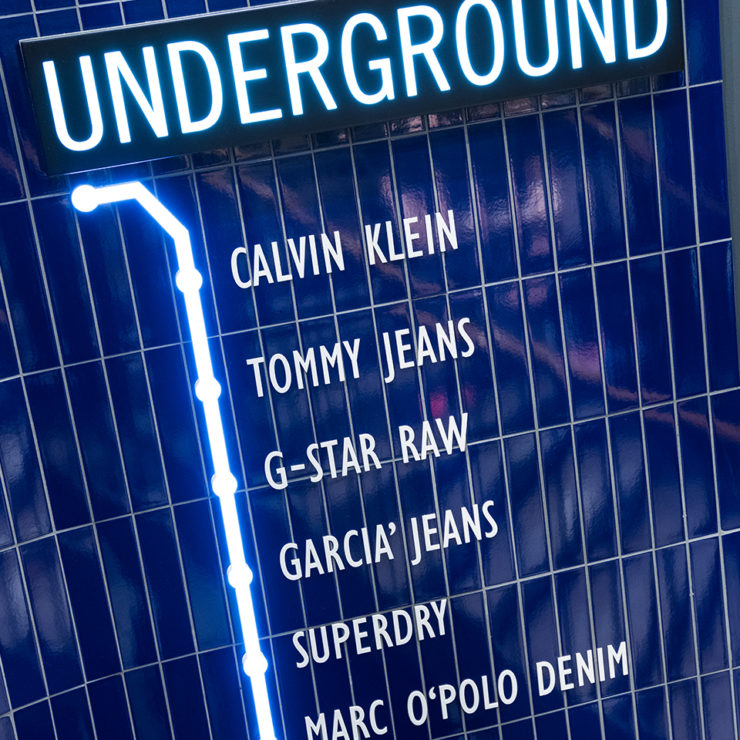 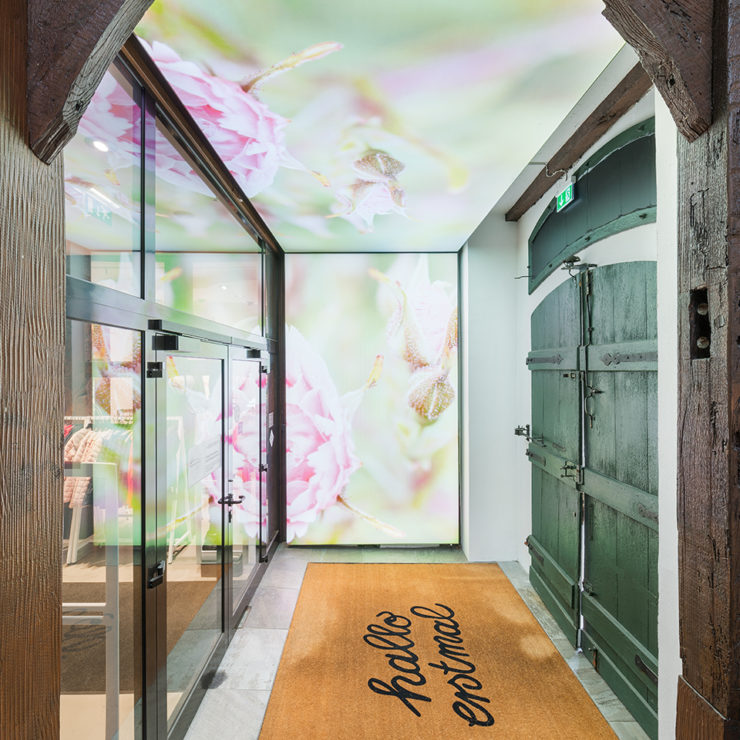 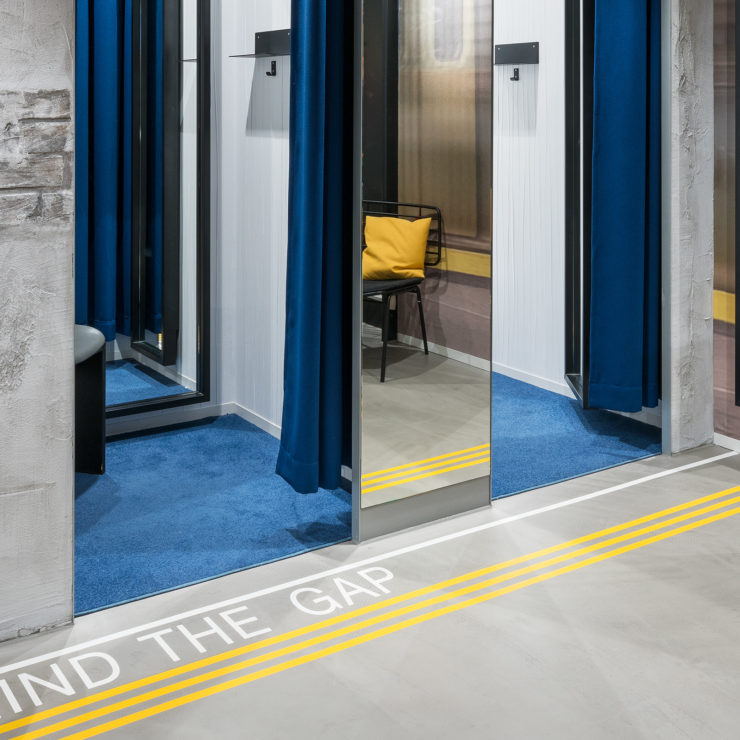